Just like buttons, graphics and movie clips, sound files can be imported into a Flash movie and dragged onto the Stage as objects. You can use the Property Inspector, the Timeline and ActionScript to control when a sound begins playing, when it stops, how it loops, and to add effects like fading in and out.

The sound file appears in the library: 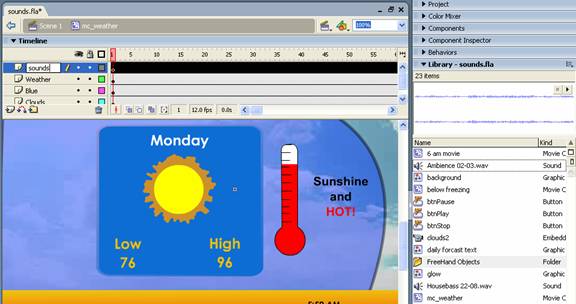 Notice that the library thumbnail shows the sound waves: 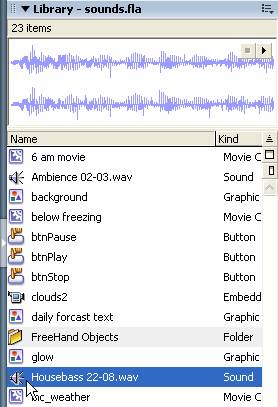 To add the sound to the movie, you actually add it to a layer: 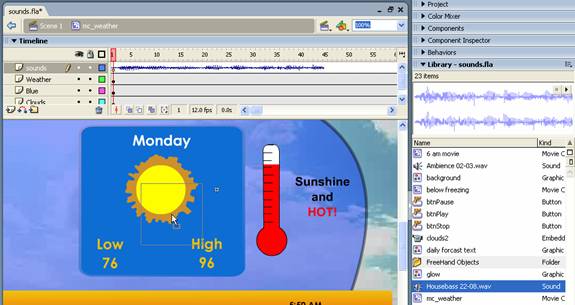 The sound won’t appear as an object on the Stage. Rather, the sound waves appear on the sounds layer in the Timeline:

Open the Property Inspector to take a look at the properties:

The Property Inspector is displaying the properties of the selected frame. The sound is displayed in the Sound menu for that frame. If you click the Effect menu, you can see a list of effects you can apply to the sound:

Click the Edit button to edit the sound envelope: 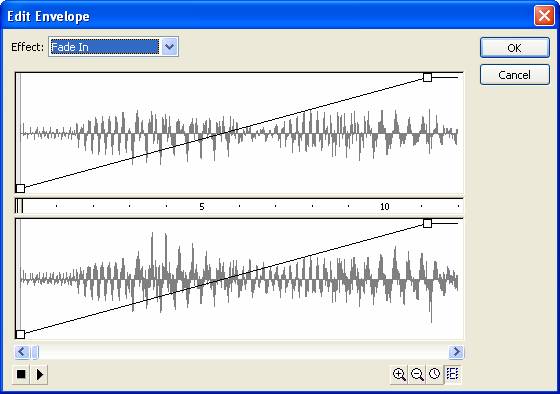 The Edit Envelope dialog lets you manually adjust how a selected effect is applied to the sound. The top panel displays the left channel, the bottom panel, the right. Click and drag the Envelope Handles—the white squares—to adjust amplitude. You can also add an Envelope Handle by clicking anywhere on the line that joins the existing handles.

. On the left side of the Time bar in the screenshot above, you can see a handle

At the bottom of the Property Inspector, use the Sync menus to synchronize the sound with your movie. The option you choose applies to the currently selected frame—so different frames can use different sync options, depending on how you want the sound to play at a given point in the Timeline. Event, the default, synchronizes the sound with an event. Practically speaking, the default action is for the sound to begin playing when the Timeline enters that frame, and to continue playing independently of the Timeline. If the sound is longer than the Timeline, it continues to play, even after the playhead has looped back to the beginning of the Timeline. This can create some problems with large sounds. If necessary, the movie will pause at the sound’s start frame (the Event frame) to load the sound. If the animation loops back to the beginning while the sound is still playing, the sound will begin playing again—on top of the previous instance. For this reason, it’s often better to use the Start sync option for sounds that span a number of frames.

The menu next to the Sync menu lets you set a repeat value. You can select Repeat to loop the sound a specified number of times, or Loop to loop the sound continuously. Looping keeps file size down, while still allowing to span a sound through the entire length of an animation.

Predictably, you don’t have to add sounds to the Main Timeline. You can add them to buttons and movie clips and reference them to control the start and stop of the sound. To demonstrate a simple example, we’ll add a sound to two different states of a button symbol—the over and down states: 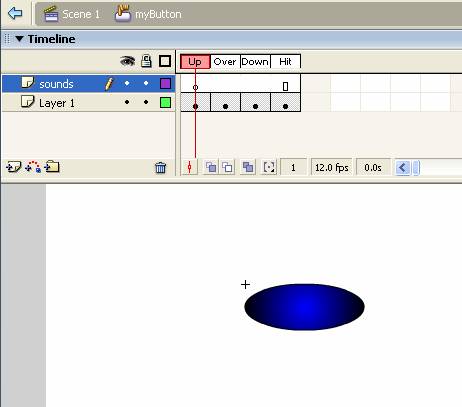 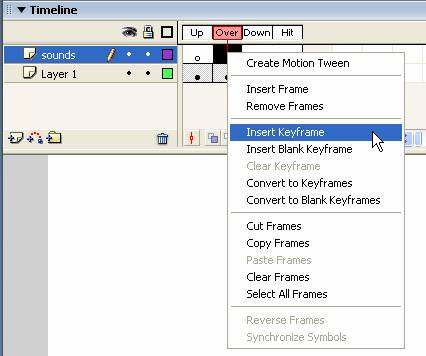 Notice that the menu displays all the sounds in the library.

As with other Flash objects, you can use ActionScript to control the start and stop of a sound, either attached to a button or elsewhere in the movie. In the next section, we’ll do this by adding some behaviors.