In Flash, behaviors are pre-written scripts that you can add to object instances in your movie. They appear in the Behaviors panel: 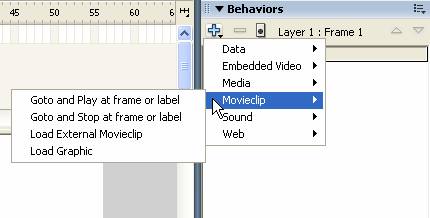 To add a behavior to the button you just created: 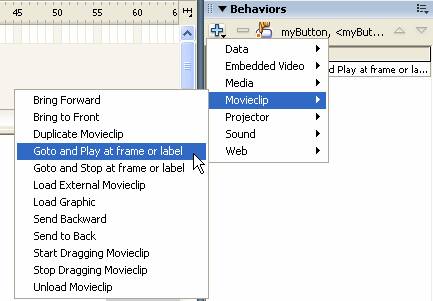 Selecting this behavior opens the Goto and Play at frame or label dialog: 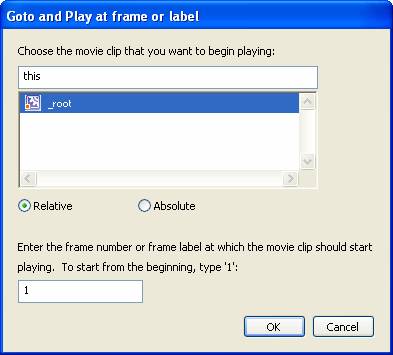 If you had added movie clips from the library, their instances would appear in the list beneath _root, which represents the Main Timeline of the movie. Notice that “this” appears in the field above the list. The “this” keyword indicates the current object. When you select a target location from the list, Flash fills in the field with a relative path, if Relative is selected in the dialog, starting with the current object (“this”). If Absolute is selected in the dialog, Flash fills in an absolute path, starting with _root. We’ll describe this method of targeti
ng objects in more detail later in the tutorial.

The behavior appears in the Behaviors panel:

Notice that if you click inside the Event column, a menu appears, letting you select a different mouse event to apply the behavior to: 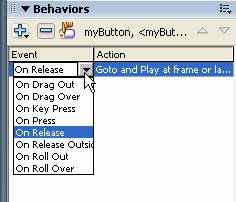 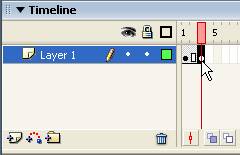 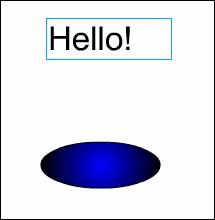 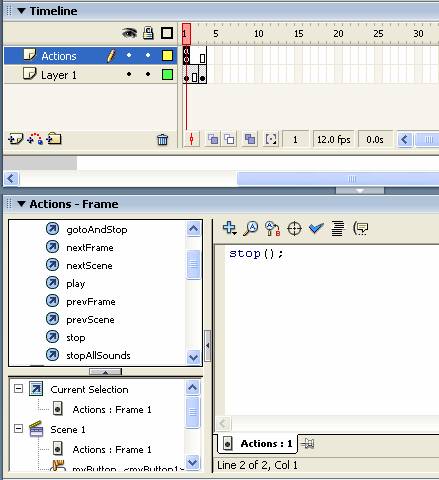 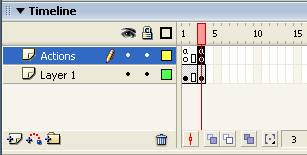 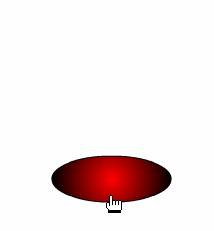 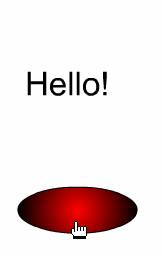 Take a look at the ActionScript Flash inserted when you added the behavior to the button: Select the button on the Stage and open the Actions panel:

Notice that “myButton1” appears on the tab below the Script pane. You’re seeing the code attached to the button instance. The code itself is very simple: it tells Flash to move to and play frame 3 when the button is released. (The grey text next to the slashes (//) are comments—they’re informational only and don’t affect the code.)

Although you can use the Behaviors panel to quickly add simple behaviors to buttons, the Actions panel provides far more options. You’ll find the same behaviors in the list of actions, and then some.

As an example, we’re going to return to our motion tween with the car. We’ll add some controller buttons—a play button, a pause button and a stop button. You can either create these yourself or borrow some from the Flash button sample library. Drag them onto the Stage, or draw them and convert them to symbols, naming each instance something like “btnPlay”, “btnPause” and “btnStop”. As you progress through the following steps, you can check the screenshots to make sure everything is correctly named and in place.

Below, our Stage shows the car with its motion guide layer—the path it will follow as it moves around the Stage. We’ve added a new layer for our buttons, and dropped the buttons on frame 1 of that layer (called “Buttons”): 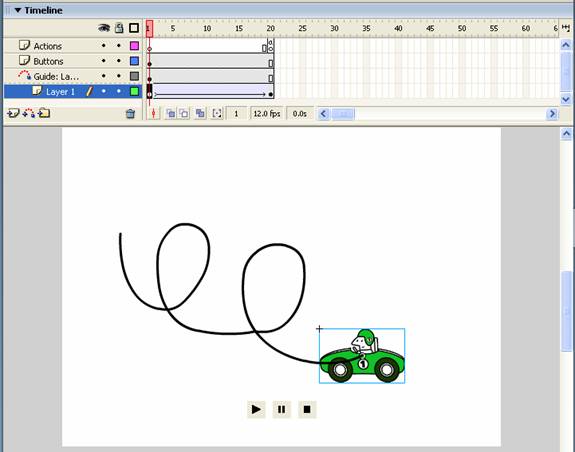 We’ve also added an Actions layer to hold our ActionScript code. We did this earlier, when we added a stop() action to the end of the movie. 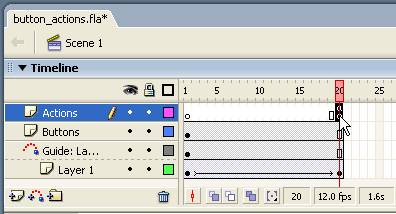 If you like, select the last frame of the Actions layer and open the Actions panel, just to verify that the stop() action is there:

Before we program our buttons we need to add a stop() action to the beginning of the movie, to prevent the Timeline from automatically moving forward as soon as the movie loads. We’ll do this now, and then we’ll add play and stop actions to our buttons to allow the user to control the progression:

Now the movie will wait for an event before playing the animation.

Remember that when we added a behavior to our button earlier, we selected a movie clip behavior from the Behaviors panel. Flash automatically added the event for the mouse (on release). When we add script using the Actions panel, we need to add the event manually. Under Global Functions, select Movie Clip Control and then on from the submenu:

When we add the on event, Flash inserts the code and then
pops up a menu allowing us to select which event we want to use. Double-click release in the menu to insert it. The on(release) event makes the behavior happen when the user releases the mouse button after clicking it.

If you accidentally lose the pop-up menu, click the Show Code Hint

button on the toolbar over the Script pane.

The Script pane should now look like the following:

This tells Flash to play the animation when the user clicks the play button.

Notice that Flash displays a code hint when additional parameters are required:

The code hint tells us that it needs a frame number—frame appears in bold in the hint, indicating what’s currently needed. Type 1 for frame 1:

This was a simple example of adding actions using the Actions panel, but if you explore the Timeline Control folder, you’ll see a range of available actions that don’t appear in the Behaviors panel. For example, you can add an action that progresses the animation forward or backward frame by frame (nextFrame and prevFrame) or scene by scene (nextScene or prevScene).