Layers are transparent sheets on which you add buttons, text, movie clips, and other objects that form your finished Flash movie. Layers can be envisioned as pieces of tracing paper laid on top of each other. They let you work with each distinct group of elements in your movie separately, and can be named, rearranged, deleted, and made visible or invisible.

The layers in your movie are displayed in the Timeline. Each new Flash document starts with one layer, called Layer 1 by default: 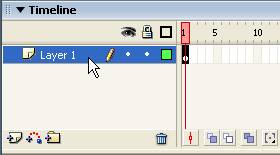 To rename a layer, double-click on it and then type a new name: 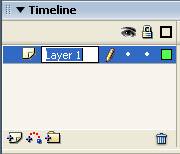 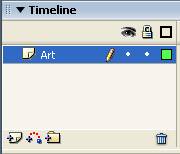 It’s good practice to create a layer for all the different types of elements in your movie, including animations, text, buttons and actions. To create a new layer, click the Insert Layer button at the bottom of the Timeline: 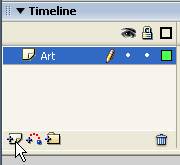 Double-click inside the name of the new layer and give it a new name:

To further organize your layers, you can create folders to group them. To create a folder, click the Insert Folder button at the bottom of the Timeline: 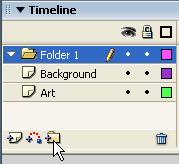 Double-click inside the folder’s name and type a new name for it: 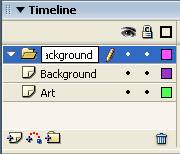 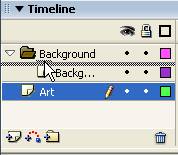 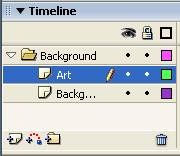 You can rearrange layers the same way—by clicking and dragging them to new positions in the list. Layers are stacked so that objects on the bottom-most layer in the Timeline appear beneath the objects placed on layers higher in the list.

To see how this works, we’ll add a couple of objects to the Stage—each on a different layer. Whenever you add an object to the Stage, you must select the layer on which you want the object to appear. A pencil icon indicates the active layer. 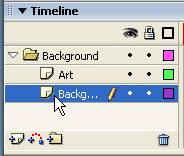 With our Background layer selected, we’ll use the Brush

tool to swipe some paint across the Stage. We’ll then add a rectangle to the Art layer:

Note that when you select a layer in the Timeline, Flash automatically selects all the objects on that layer. Because our Background layer is selected, our paint stoke appears as a selection, represented by the dotted shading.

When you have a number of objects on a number of layers, you can temporarily hide layers you don’t want to work with. To do so, click the Eye column next to the layer you want to hide. A red X indicates that the layer is hidden: 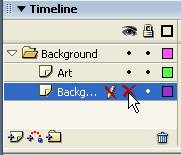 When our Background layer is hidden, only the rectangle appearing on the Art layer is visible on the Stage:

To restore the visibility of the hidden layer, click the Eye column in the Timeline again: 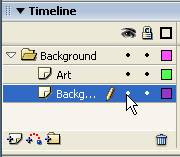 You can lock layers to prevent them from inadvertently being modified when you’re working with another layer. To do so, click the Lock column next to the layer: 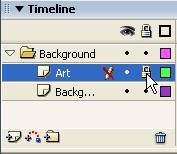 The objects on the layer remain visible, but they can’t be selected or modified.

This is a kind of compromise between displaying and hiding a layer—you can see where objects are positioned, but you can also see behind them. You can also display a layer as an outline when you want to use objects on the layer as guides for painting.

A few additional layer properties are available in the Layer Properties dialog, which you can open by double-clicking a layer (away from the name of the layer). 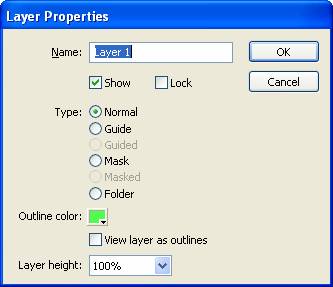 Using the Layer Properties dialog, you can specify such properties as the layer type, the lock and visibility setting, the outline color and the layer height.

You can mask portions of the movie you don’t want visible by adding a mask layer. Objects on mask layers can be animated so the graphics on the underlying layers are revealed as the Timeline progresses.

To create a mask layer, simply add a new layer over the layer in the Timeline that you want masked, name it “mask” and then define it as a mask layer: 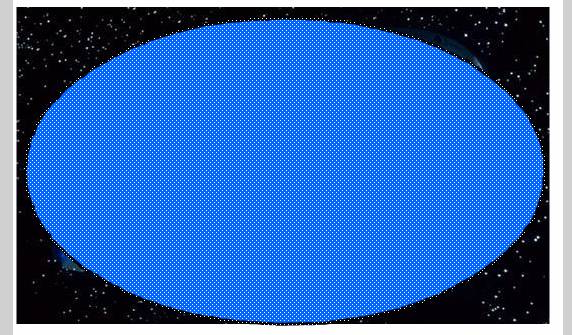 The mask is applied to the underlying layer: 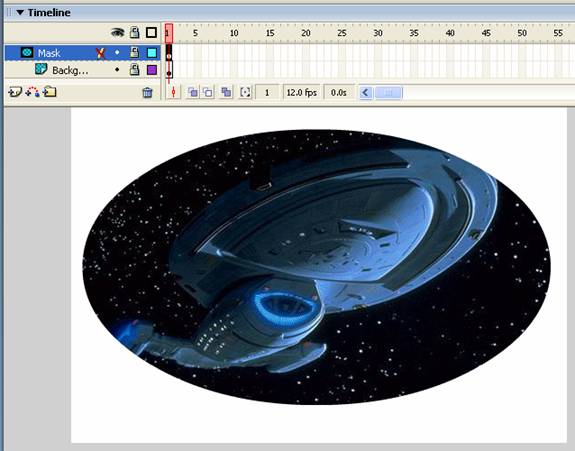 You can unmask a layer by right-clicking it and selecting Mask again from the shortcut menu: